We hunt some of the best areas for Pheasants in Bulgaria!

Who is offering this hunt?

The pheasant (Phasianus colchicus) is one of the most popular game species to hunt in Bulgaria. The males have very attractive feathering, the body plumage is barred bright gold, with green, purple and white markings.

The bird's weight reaches up to 1,5 kg. It is comparatively easy do breed and is widespread in nearly all hunting enterprises in the country. The best feature of this feathered game is its delicious meat. In case you decide to hunt for pheasants in Bulgaria, we from Hunting in Bulgaria team offer you the services of our gourmet chefs to cook it.

We could also offer the services of taxidermists, so you can bring home the beautiful bird along with the pleasant hunting memories.

Description: Male pheasants exhibit many colour forms as in Europe much hybridisation between different introduced sub-species has occurred. Generally the body plumage is barred bright gold or copper red and chestnut brown, the head is iridescent gren/blue with red wattles, with a small crest and red wattles. Some individuals have a white collar. Long brown tail, streaked with black. 60-89 cm in length (the tail accounting for almost 50 cm). The females and juveniles have a duller mottled brown plumage and measure 50 -63 cm in length (including a tail of around 20 cm).

Hunting available in: All areas of distribution in Bulgaria.

Accompanying hunt: It can be combined with European Hare / rabbit hunting.

In Western Europe is  unknown that in Bulgaria there are many well-managed areas rich in  feathered game. In difference of that, our country is very popular in the Mediterranean. Each year we welcome hundreds of hunters from United Kingdom, Italy, Greece, Cyprus and even from France, who hunt pheasants, partridges, rock partridges, ducks, geese, woodcock, doves and quail in Bulgaria. Along with that can be hunted and rabbits.With the hunting of pigeon we  begin in early August.The daily hunt in northeastern Bulgaria is very good.The  area and the  biotope  are ideal for those pigeons - enormous agricultural massifs with cereals  chopped  by forest and waterways.

In early October  began hunting of pheasants.Their populations, as well as these of rabbits are very good.4-5 hunters are shooting  during the day between 50 and 100 pcs. game. At the same time and grouse hunting.

Woodcock hunting is a passion of many hunters of feathered game. But this type of hunting depends  very much of the time. Usually the best period is in November in the region of the Black Sea.

In the Danube Valley we are  organizing  very successful hunting wild ducks and geese, mostly along the Danube, but also along the inland  areas in the vicinity.

Taking hunting dogs is  possible. But the hunting farms dispose with their  own well trained dogs. 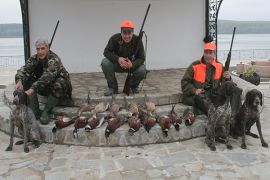 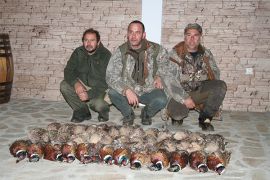 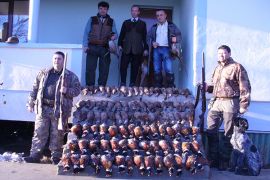 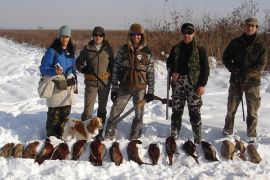 No services match your search query.

Book Your Hunt in Bulgaria:

Pheasant hunting is a fun and exciting type of wing shooting in Bulgaria's flatlands.

The hunt for pheasants begins at around 9:00 AM and can last the entire day. The terrain can be small, rolling hills, flatlands or along rivers and canals where thick vegetation is present.

Wild pheasants prefer hiding in thick bushes. The best places for this kind of wingshooting in Bulgaria are along the river Danube, in the northern part of the country. The hunt can be done in a group or individually, walking along rivers canals and the edges of forests.

When hunting pheasants in Bulgaria, continental pointing dogs find wider use, because the terrain is overgrown with thick vegetation where the English pointing dogs find difficulties. There are areas in Bulgaria where pheasants bred in reserves can be hunted. These birds live on huge patches of closed off land where they can grow much like their wild counterparts. They are bred in order to meet the numbers that hunters desire, especially during driven hunts.

Pheasants can be hunted all year round in Bulgaria at the designated places.