We hunt some of the best areas for Wolf in Bulgaria!

Who is offering this hunt?

Enjoy individual wolf hunting in some of the best hunting districts in Bulgaria. The hunt organisation is high class, with skilfull, experienced guides who really know their game.

Description: Wolf is the most elusive animal for hunting in Bulgaria. Cautious, timid, and suspicious it is a real challenge to meet that animal. Bulgaria is among the few European countries that have stable wolf population and so far hunting wolves in Bulgaria is legal. Hunting season is all year round because it is considered that wolves are causing lots of damages for the farmers. We hunt wolves on bait and rarely have the chance to see some on a wild boar driven hunts. The hardest Bulgarian trophy to get but it worth’s it at the end!

It takes a lot of work to outsmart such an intelligent predator as the wolf, and all hunting methods are used in various times and locations. A lot of combination hunts are opportunistic, where the hunter and guide just keep their eyes open and if they see a wolf they try and get it. Calling, both by imitating prey animals and doing the wolf howl to make the resident pack think someone intruded into their territory, works well, and so does biting. Last but not the least, driven hunts, with or without dogs, or limiting the animals’ movements with a line of flags on a rope, is highly successful in Bulgaria. Often guides practice a combination of methods, e.g., attracting wolves to the area by bait, locating them by calling, and then put the hunter on a high seat or arrange a drive.

Hunting available in: All areas of distribution in Bulgaria.

When to hunt Wolf?

The main trophy of wolf hunting being the skin, guided hunts are usually scheduled to periods when the wolf fur is in prime condition, which would naturally be in winter. In the late winter months wolves may be especially vulnerable to hunters due to lack of food, but high snow in typical wolf habitat limits the hunters’ mobility. November and December typically offer the best compromise.

Accompanying hunt: Wolf can be combined with hunting for other predators. 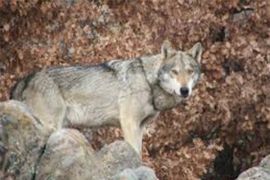 No services match your search query.

Book Your Hunt in Bulgaria:

In the near past this species was widely distributed throughout the world. Wolves are every-biont” species living in different environmental conditions - forests, tundra, taiga, plains and mountains. The over-intensive hunting together with the change in their natural habitat in the Northern hemisphere have considerably limited their living area and today they are assigned to the category of endangered species.

Systematically the wolf belongs to the family Canis. It has golden-yellow eyes and longer legs, bigger paws, more pronounced and highly developed jaw, longer snout and larger brain compared to the dog.   Wolf paws are turned inwards towards its belly, almost touching it. This allows them to run at a speed of 70 km/h. Their fur does not have particular colouring, except for a scar around the eyes. The fur’s color is gray to gray-brown but can be white, red and brown and black (photo of eng. M Mihailov). Wolves are about 66-80 cm high measured at the shoulder and weigh about 25-52 kg. The females are approximately 20% smaller than males.

Way of life and feeding

Wolves are social animals that live and hunt in packs organized in a strict hierarchical order, with clearly defined male and female leaders called alpha male and alpha female. Originally it was thought that the purpose of this social structure is hunting, but some modern authors consider that pack functions are related not only to hunting but also to the successful reproduction. Packs include 2 to 20 wolves, as the packs average in size consist of 6 or 7. Hierarchy in the pack is relatively strict, valid for all activities of the pack: from the order of eating, to that, which wolves are allowed to reproduct. New packs are formed when the male leaves its native wolf pack and obtains a territory. Wolves looking for other wolves with which to form a pack, may travel very long distances, until they find a suitable territory. Single individuals avoid the territories of other wolves, because intruders are either chased away or most often killed.

Wolves are known for their distinctive howl, which is used to call members of the pack at a particular place or to communicate with each other. Observations of packs suggest that howling takes place often at sunset during the summer before the adults go hunting. This is repeated on their return at sunrise. At the end of  the summer the cubs are already grown up and howl at the slightest stimulus. Wolves often howl, when defending something.

In the wild wolves live 6-9 years and in the zoos - up to 16 years. Record life expectancy of a wolf is about 20 years. The death rate is high among the cubs and few of them survive until the first winter. The main factors for the death rate in wolves are humans, car accidents and injuries during hunting. All diseases affecting domestic dogs, affect wolves. They adapt easily to changes in the number of prey, so mass starvation is unusual for them. This species retains its population provided that the alpha pair is not killed.

According to the law of nature, usually only the alpha couple in the pack breeds. Mating occurs once a year, between February and May. An interesting fact from the social organization of wolves is that they are usually monogamous – the members of the alpha pair mates only with each other. Sometimes one of the alpha males mates with a subordinate female. This occurs in large packs when there is abundant prey. Pregnancy lasts for 60 to 63 days and the cubs are born blind and completely dependent on their mother; their number is 1-14; 6 or 7 on the average. They remain in the lair until the 8-10th week. The mother is alone with the cubs in the first three weeks, but then all members of the pack help in raisin. The cubs eat food, vomited by older wolves until their 45th day. Then they eat meat, brought by members of the pack. Females reach sexual maturity at 2 years of age, and males – at 3 years. Most of the wolves leave their home pack at the age of 1-3 years.

The wolf is a harmful predator, so that its number must be adjusted. Wolf hunting is extremely interesting and difficult. The hunting is performed with battues, stalking and ambush. The trophy is the head and the skin.